Java / OOPS Concepts and its implementation in Java

1. OOP. 2. Principles of OOP. 3. Open closed principle. 4. Difference between object oriented and object based language. 5. Define class. 6. Object. 7. Define a variable/data. 8. Explain Diamond problem. 9. SOLID principles of OOD (Object Oriented Design). 10. Why Java does not support operator overloading? 11. Differences Between Static Binding And Dynamic Binding In Java. 12. In a class, a method is overloaded and One form is declared static while another form is non-static. Is that method properly overloaded? 13. What is Encapsulation in Java? 14. Difference between data hiding and data abstraction in OOPS. 15. Difference between abstraction and encapsulation in OOPS. 16. Which of the Java OOPS feature promotes access protection or data hiding? 17. Explain Liskov Substitution Principle (LSP). 18. Explain cohesion and coupling in OOD.
Could not find what you were looking for? send us the question and we would be happy to answer your question.
OOP.

The below are the principles that attributes to the OOP behavior.

In object oriented programming world, the open-closed principle states that the software components classes, methods etc should be open for extension but closed for modification. A class can allow its behavior to be extended without modifying its own behavior.

Difference between object oriented and object based language.

e.g. Javascript does not support inheritance and polymorphism.

C++, Java are examples of object-oriented and Javascript and VB are object-based.

A class is a blueprint/prototype or a template for creating different objects which define its properties and behaviors.

Java class objects exhibit the properties and behaviors defined by its class.

A class provides fields and methods that describe the behavior of an object.

The cast in the below picture represents the class and the impression on the sand are the objects.

"Object" refers to an instance of a class where the object can contain any combination of variables, functions.

The diamond problem (a.k.a deadly diamond of death) refers to an ambiguity that brews due to allowing multiple inheritance.

In Java, multiple inheritance is not allowed for classes and permitted only for interfaces to eliminates this serious issue. 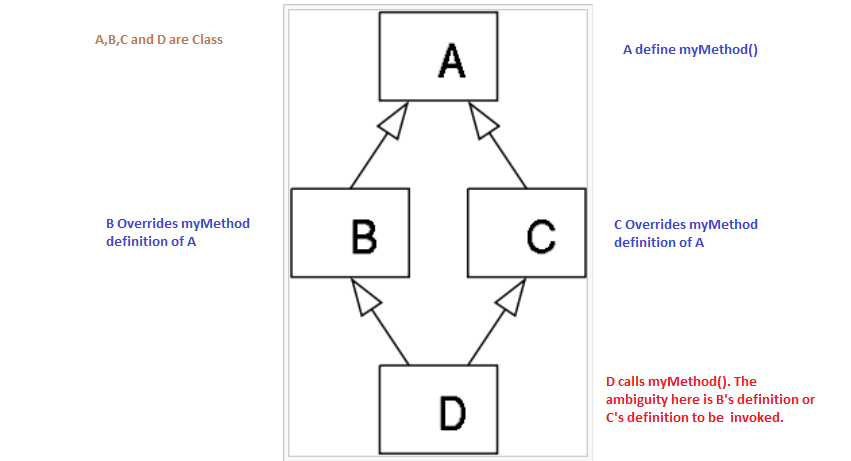 SOLID principles provide the specification for the design of a class to ensure high quality.

There are five principles as each letter in SOLID represents one.

Every class should only serve a single purpose and that responsibility be encapsulated at the same class. For e.g. creating a CAR Class should define the properties that a car would have and along with its functions. It does not have to have Driver Class who drives it.

The Open-Closed Principle (OCP) states that classes should be open for extension but be closed for modification.

An extension of the Open Close Principle and ensures that new derived classes(child) are extending the base class(parent) without altering its behavior.

The Interface implementing class should not be forced to implement methods that it don't use. If it forces then it is not compliant to Interface segregation Principle and this interface referred as fat interface. The Fat interface could be fragmented further to be in align with Interface Segregation principle.

Why Java does not support operator overloading?

Differences Between Static Binding And Dynamic Binding In Java.
In a class, a method is overloaded and One form is declared static while another form is non-static. Is that method properly overloaded?

Yes. Compiler checks only method signature to validate if a particular method is overloaded or not. It does not check static or non-static nature of the method.

What is Encapsulation in Java?

Encapsulation in Java is a concept that enforces protecting variables, functions from outside of class, in order to better manage that piece of code and having least impact or no impact on other parts of a program due to change in protected code.

Difference between data hiding and data abstraction in OOPS.

Data hiding is when the designer specifically decides to limit access to details of an implementation.

Abstraction is when you are dealing with an aggregate, for example, a Car is an abstraction of details such as a Motor, Wheels, brake, etc. Abstractions allow us to think of complex things in a simpler way.

Difference between abstraction and encapsulation in OOPS.

Encapsulation restricts access to or knowledge of internal structures of an implementation.

Which of the Java OOPS feature promotes access protection or data hiding?

The Liskov Substitution Principle is a concept in Object Oriented Programming that states: Functions that use pointers or references to base classes must be able to use objects of derived classes without knowing it.

Explain cohesion and coupling in OOD.

Cohesion refers to what the class (or module) can do. High cohesion is preferred since it is focused on actions it can perform and limited. Lower cohesion means that the class does a great variety of actions, broad, unfocused.

Coupling refers to how related or dependent two classes/modules are toward each other. For low coupled classes, changing in one class should not affect the other.

So as per good Object analysis and design (OAD), high cohesion and low coupling is ideal.